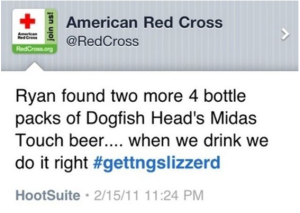 Think you can let your social media team tweet away and not monitor the mentions and results?

Well, this week the American Red Cross, they learned a sobering lesson (pun intended) that you better be listening.  They were, and they recovered…

There was an accidental tweet of a personal nature launched over the American Red Cross Twitter account.  It referred to a staffer partying with friends drinking Dogfish brewery’s Midas Touch beer – and it lit up the Twittersphere.  Here is a link to the full story on the Huffington Post.  Better yet, jump into the Tweet Stream on this topic and get a load of all the traffic this thing drove: http://twitter.com/#!/RedCross

With some quick thinking and some quicker action, The Red Cross has turned this potentially embarrassing gaffe into a fundraiser.

This proves once again that if you can show that you are listening in social media, and that you are a part of the community, the community will reward you with the benefit of the doubt, and maybe even some donations.  You might even say the Red Cross has the Midas Touch!